Peace Mothers’ Coordinator Elizabeth Yolimatu Kolugbonda facilitated the formation. She said the formation of the Chiefdom Peace Mothers’ executive was an effort to further strengthen the sectional groups. She acknowledged the difficulties women face in their various sections but encouraged them to stay united and dedicated. She added that they as peace mothers have a lot to offer to their communities and forming a chiefdom executive was a very important step towards fulfilling that role. 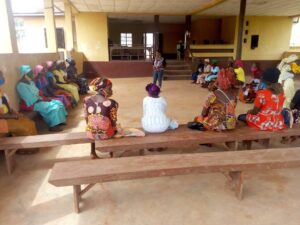 During the formation process the executive positions positions were distributed as follows:

Groups gave updates on their sectional activities. Peace Mothers’ representatives from Taninihun Gomoh section Musu A Kajua said their group has 25 bushels of rice and gives seed loans to members on interest. She added that they have Le 5,253,000 at hand from paid labor and contributions.

Madam Grace Kalokoh, the elected chairlady, said she started working with Fambul Tok in 2016 and that she was an example of the numerous women empowered by the organization in the many national conferences she attended. She called for unity among members. Their first rotational meeting is on the 5th March at Domboma section.