Fambul Tok continues to stand by its core values–one of which is being non-political and non-partisan–and it does not compromise any of its principles.

This was demonstrated recently during the training of peace coordinators (teachers) from 30 schools who gathered at the Pastoral Centre in Kenema for a two-day training organized by Fambul Tok in collaboration with Catalyst for Peace from December 1 to December 2, 2013.

During self-introductions, Mohamed P. Kamara, a teacher of the King Fahad Junior Secondary School in Kamalo, Sanda Loko chiefdom, Bombali district in the northern part of Sierra Leone introduced himself as an elected councilor in one of the wards in that part of the country.

John Caulker, the Executive Director of Fambul Tok International-Sierra Leone, reviewed the Fambul Tok core values and did not mince words when he stated that if anyone knew that he/she could not meet the expected standards, then he/she would be allowed to leave, adding that the core values are the guiding principles of the work of Fambul Tok. 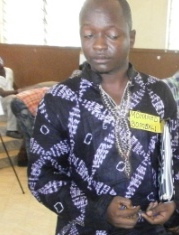 Councilor Kamara willingly stood up and told his colleague teachers that he is ready to be replaced by another teacher from his school when he returns home. He did not hide his emotions when he said that even though he is a teacher, he is an active politician in his community.

Councilor Kamara was cheered by teachers for his boldness and for respecting the core values of Fambul Tok. He stated that even though he would no longer serve as peace coordinator for his school, he would do everything possible to work with his colleagues to ensure that the school club grows.