The newly elected chairman of Koinadugu District Council,Lawrence T.Kargbo has said based on the successes  of the People’s Planning Process(PPP) in the district,Council will throw  its full support behind Fambul Tok so every village in in the district will be involved in development aspirations 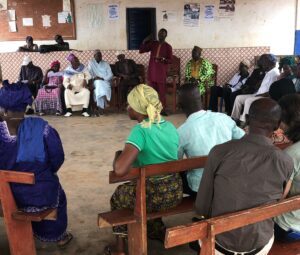 Chairman Kargbo was addressing his audience during a one day validation of the Sengbe chiefdom plan which took place at the Yogomaia court barray in Kabala township.He said though he is new in Council he had heard a lot of good news from communities that have undergone PPP and being at the helm of affairs he is ready to support the initiative so communities will be fully involved in development processes. He personally on behalf of Council requested from Fambul Tok to roll out PPP through all ten chiefdoms in the district

On behalf of Hon.Paramount chief of Sengbe chiefdom,Alhaji Marah said this is the first process that has brought on board all villages.He went on to state that PC would have loved to be present but could not due to his busy schedule

Section chief of Madingo section,Mohamed Sidibay explained how PPP has assisted his community to develop.He highlighted its importance adding that most villages that were not working together are now embarking on activities that would yield sustainable development

Another chief,Mohamed Sesay cited instances on the broken cup adding all hands should be put on deck to avoid  so resources do not slip through.He added that the PPP has good potentials and if communities are fully brought on board they will realize development without depending on external support 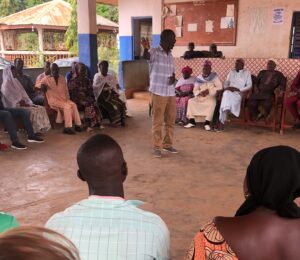 Participants were divided into different sections to go through both sectional and village needs earlier highlighted in the plan.The exercise was to  make corrections and confirm what appears in the plan before it is validated