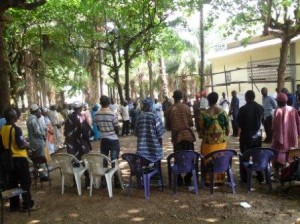 Participants during the meeting

The people of Bombali District in the North of Sierra Leone have accepted and given the green light to Fambul Tok to extend its activities in that part of the country.

In his contribution during a one day reconsultation meeting for stakeholders at Pastoral Centre in Makeni on Monday, 13 December 2010, Paramount Chief of Tendaren chiefdom in Bombali district  said ‘peace does not hold water without forgiveness’. P.C.Kandeh Wusu Sesay 11 went on to state that Fambul Tok addresses  the incomplete work of the then Truth and Reconciliation Commission that was set up to investigate what went wrong and the way forward for Sierra Leone. He said Fambul Tok intervention in Bombali District is timely as people have lots of grievances which if not addressed would result to calamity. 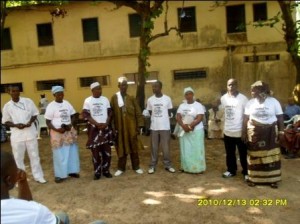 In her remarks, Regina Posseh Kalawa of Biriwa chiefdom said those that suffered the brunt of the war were women. She recounted her ordeals during the war years and stressed that women should be given a uplift.

Chiefdon Speaker of Gbendembu  Ngowahun, Pa Kapri Njai, testified that he was caught by the rebels and one of them placed a rifle in his mouth. “As  I speak to you now I find it difficult to chew because my teeth ache anytime I chew hard food but Fambul Tok says we should forgive so I’m ready to reconcile.” 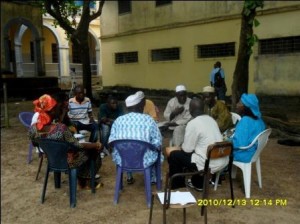 One of the traditional leaders, Paramount Chief Kandeh Finnoh of Magbaiaba Ndowahun chiefdom, disclosed that his chiefdom is littered with mass graves as people were summarily executed by rebels. He said it is difficult to forget what happened to people during the war but emphasized the need for forgiveness and reconciliation.

Addressing participants, FTI Executive Director John Caulker said Sierra Leone has the culture of forgiveness. He emphasized that although the war caused a lot of problems, it did not take away the rich traditions of Sierra Leoneans. He gave a brief background of Fambul Tok, adding that it started in Kailahun district and in  just two years it has extended to Moyamba, Kono, Koinadugu and now in Bombali districts.

John Caulker said Fambul Tok is committed to its core values, one of which is being non political and non partisan. He told participants that the organiaation does not compromise with its values, adding that it walks with communities toward healing and reconciliation processes.

He said people who were deeply affected by the war did not have the opportunity to say what happened to them since public hearings of the TRC were held only in major towns. He said Fambul Tok creates a safe space for victims and perpetrators to sit, dialogue and reconcile.

The chairman of the meeting Rev. Moses Khanu called on stakeholders to cooperate with Fambul Tok. “I’m one of the men that participated in the formation of Fambul Tok and with just two years of its activities there are calls both locally and international for expansion.”