In the middle of a critically acclaimed festival run and having just kicked off an international community screenings campaign, Fambul Tok is now available on home DVD!  You can order your copy here and get a 25% discount off the retail price.

(Please note, though, that the home DVD is licensed only for home use. If you want to share these stories of forgiveness with your community, school or in another public setting, you can purchase a discounted screening license here and take part in our community screenings campaign!)

The DVD has already garnered high praise, including this review on Amazon.com, from one of their “top-10 reviewers,” K. Harris — “In one of the most horrific civil wars of recent times, ordinary citizens were pushed to perform gruesome atrocities against their friends, families and neighbors in an effort to survive the tumultuous and brutal era from 1991-2002 in Sierra Leone. The stories and reports are shocking, horrifying and unforgettable and as the war came to a conclusion–the country was irreparably scarred. 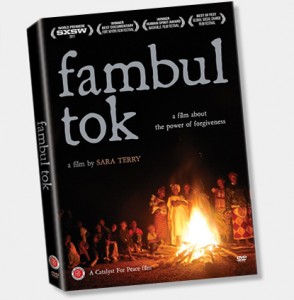 “With the government only dealing with the major power players (about 14 people), everyone else was given a general amnesty for their crimes against one another. No one had attempted to heal the country’s deep wounds as victims and their assailants were forced to coexist with no dialogue, discussion, or admission of wrongdoing. And we’re not talking little offenses. Some of the subjects within the powerful and hopeful documentary Fambul Tok experienced sexual assault, maiming, and the murder of family members in the most harrowing circumstances imaginable–oftentimes at the hands of people they knew and loved. The film charts the beginning stages of a process to help the people and communities of Sierra Leone move past these painful memories with forgiveness.

“Fambul Tok (translates to family talk) introduces John Caulker, the originator of a grassroots movement to address these open hostilities and regrets. The organization is seen going into communities to orchestrate public meetings where anyone can level charges against anyone else. In the effort to make issues public, the accused can show regret, make explanation and ask for forgiveness. Healing starts with the simple opening up of a dialogue. The actual scenes of these talks have a rawness and realness that make the movie so moving and thought-provoking. Filmmaker Sara Terry stays removed from the action, shoots in a very straightforward way, and lets the participants be the story. Some of the tales told will certainly stay with me, but the fact that the forgiveness seems genuine and lasting is a testament to a forward thinking openness we could all learn from. And in a stunning turnaround, the film ends with a major revelation from an unexpected source. It demonstrates the ultimate power of the truth and is, quite frankly, disturbing and unforgettable.

“I watch more documentaries than the average person–I’d be willing to wager almost anything on that fact. Some I think I will like, some I think will be good for me. I thought Fambul Tok sounded important prior to watching it in sort of a medicinal way, but I didn’t think it would affect me on such an emotional level. I have rarely found a film to be both shocking and inspirational. If the victims of horror and atrocities can forgive those that committed the crimes, it actually inspires a hope for progress. And that’s what these all stand for–progress through community. It’s not a Western idea per se, but maybe it should be. Sparse, simple and quite powerful–an easy recommendation to lovers of documentary or anyone interested in world events, civics, or sociology.”

Purchase your copy today and join us around the bonfire!