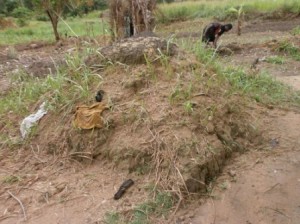 During a Fambul Tok bonfire, in front of hundreds of villagers, one of the relatives of those shot dead told how 14 innocent people were killed by members of the Sierra Leone Army during the early days of the war in Bunumbu town, Peje West chiefdom, Kailahun district.

Testifying at a bonfire in Bunumbu town on March 29, 2013, Mohamed Bainda recalled a date in 1991 when the war raged, and several villages were captured by the then Revolutionary United Front rebels of Sierra Leone. He revealed that one of the influential figures in Bunumbu, G.G.Musa allegedly submitted names of those he thought were rebel collaborators to members of the Sierra Leone Military. He went on to state that soldiers arrested 14 people, including traditional chiefs whose names were on the list. He disclosed that without cross-checking the information, the captives were ordered to dig their own grave, and one after the other, they were shot.

Other testifiers also accused G.G. Musa of being responsible for the death of the loved ones. On behalf of the late G.G. Musa family, Henry Kamanda apologised and asked for forgiveness. He said thatt even though the accused is no longer alive, he thought it fitting to plead on his behalf.

The testimony and apology was accepted in good faith but also requested the pouring of libation  and a monument to be constructed at the mass grave site in Bunumbu. 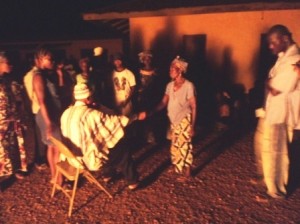 Meanwhile the regent chief of Peje west chiefdom, Sheku Gboso has reconciled with his blood sister during a bonfire. Both have been alienated for the past five years but Fambul Tok made it possible for them to shake hands once again and unify as family members.