The Vice Principal of the Port Loko Teachers College says that academic staff in Universities and other tertiary institutions in Sierra Leone have a very important role to play, especially regarding national politics and the development of the country. 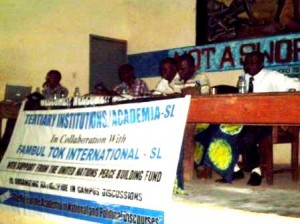 Panel facilitators responding to questions from the audience

Adankwa Koroma made these remarks as he addressed lecturers, teachers and students at the auditorium of the Port Loko Teachers College on Thursday, August 23, during a day-long national discourse forum organized by Academia- Sierra Leone in collaboration with Fambul Tok International – Sierra Leone.

According to Koroma, who chaired the forum, the role of academics for the past three decades has been confined to teaching and research, adding that the trend has now changed as they have taken the lead to contribute to national issues in the country. He continued by stating that academics in other nations have been playing a significant role in their countries’ development for quite some time. 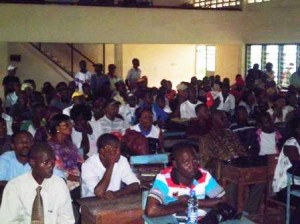 Turad Senessie, the forum’s lead facilitator who lectures at the Njala University, Bo campus, gave an overview of the program, explaining that the series of discussions that have been held in universties and tertiary institutions are part of the United Nations Integrated Peacebuilding Office in Sierra Leone’s (UNIPSIL) support for non-state actors gearing up for the 2012 elections. He emphasized that UNIPSIL has consistently been engaging civil society organizations in Sierra Leone and this time around, are focusing on engaging Academia-Sierra Leone so that academics would be able to deliberate on national issues and find solutions to some of the numerous problems that would be raised. 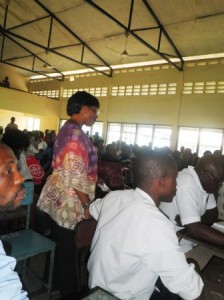 A female participant raises a question

Senessie said that apart from academics, they will engage politicians, policy makers and communities. He explained the different stages of the project, starting with mobilization of campuses to acquire the necessary background information. He also disclosed that in-campus discussions have already been held in Freetown, Bo, Kenema, Makeni and Port Loko to identify problems and proffer possible solutions, and the results of these meetings will be compiled into a report and published to be used as reference materials for researchers and students at institutions offering peace and conflict studies.

During the various discussions in the regions, similar issues emerged, including political intolerance, tribalism, fair play and nepotism. Suggestions were made for consultative conferences to be held so that academics could further deliberate on these pertinent issues.