Dispatches from the Front Lines of Peace
Fambul Tok (FT) on 19th February 2021 facilitated the training of 26 Community Welfare and Mediation Committee (CWMC) members drawn from 13 communities across Madrifeh Section, Diang Chiefdom, Koinadugu District in northern Sierra Leone. They were trained on various topics such as Mediation, Reconciliation, Communication, Transparency, and Leadership alongside dramatizing contemporary issues for their better understanding. 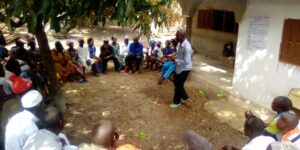 Host town chief, Pa Kulie Koroma welcoming participants said FT intervention was timely as the chiefdom has a host of issues including conflicts among mining companies and local artisanal miners. The miners saw the companies as encroaching on their communities’ traditional livelihood space. Land dispute among communities was another burning issue in the chiefdom.

The CWMC Vice chairperson, Madam Sunkarie Kargbo of Bod Os village, reiterated the loss of local household income because of the activities of the mining companies and called on women in the chiefdom to close ranks and support the work of the Madrifeh CWMC.

The date and venue for their first rotational was also agreed.